Background
Trident Swim Foundation (tridentswimfoundation.org) funds and operates nine inner city swim and academic (swimmer-scholar) programs in New York City and now in Inglewood, California. Trident’s focus is mentorship and youth development through athletics and academics with great kids in the toughest inner city contexts. The primary funding vehicle is individual and private donorship, in addition to two annual fundraising events called the Great Relay NYC and the Great Relay LA. With the 2015 launch of the first swimmer-scholar program in Los Angeles (Inglewood High School), the October 2015 Great Relay LA was an inaugural LA fundraising event with a total goal of $20,000.

Problem
Creating interest, inspiration and donor support to reach (and surpass) the $20,000 funding goal to sustain Trident Swim Foundation swimmer-scholar programs for the next year, benefiting dozens of inner city youth, and powering their development and ambitions. Just 24 hours prior to the Great Relay LA Event, contributions were indicating a problematic shortfall, reporting only $13,788. The total funding goal of $20,000 was at risk, and the 2016 programming along with it.

Solution
Vumanity immediately responded to an urgent call to action – providing use of the VuNote mobile app, and creating a custom branded design style in a matter of hours. Using these tools, Trident recorded a branded video message (VuNote) for the purpose of inspiring, personalizing, and urging donors to action to support the Trident Great Relay LA. Initially, about 100 participants and their families pushed out this VuNote via email and social media outreach, which in a matter of hours connected with more than 25,000 people.

Result
Within 72 hours donations escalated from $13,788 to $53,255 – a 3.8X increase in just 3 days. Trident more than doubled its initial goal of $20,000. Using industry standard fundraising event metrics, Trident attributed 72% of its funding success to the use of VuNote for donor communications.

Summary
Through the use of VuNote, Trident Swim Foundation is fully funded for another year, and can now double its swimmer-scholar program in Los Angeles, benefitting another 25 inner city kids and their families in 2016.

Trident experience and thanks 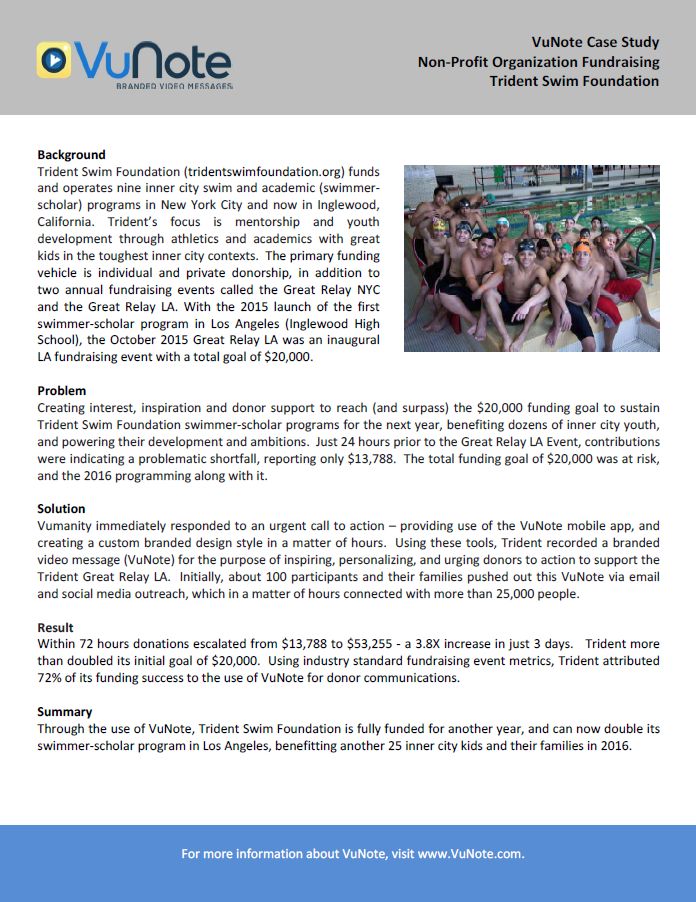